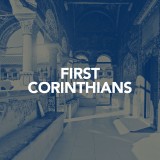 1Cor. 8:1 Now concerning things sacrificed to idols, we know that we all have knowledge. Knowledge makes arrogant, but love edifies.
1Cor. 8:2 If anyone supposes that he knows anything, he has not yet known as he ought to know;
1Cor. 8:3 but if anyone loves God, he is known by Him.
1Cor. 8:4 Therefore concerning the eating of things sacrificed to idols, we know that there is no such thing as an idol in the world, and that there is no God but one.
1Cor. 8:5 For even if there are so-called gods whether in heaven or on earth, as indeed there are many gods and many lords,
1Cor. 8:6 yet for us there is but one God, the Father, from whom are all things and we exist for Him; and one Lord, Jesus Christ, by whom are all things, and we exist through Him.
1Cor. 8:7  However not all men have this knowledge; but some, being accustomed to the idol until now, eat food as if it were sacrificed to an idol; and their conscience being weak is defiled.
1Cor. 8:8 But food will not commend us to God; we are neither the worse if we do not eat, nor the better if we do eat.
1Cor. 8:9 But take care that this liberty of yours does not somehow become a stumbling block to the  weak.
1Cor. 8:10 For if someone sees you, who have knowledge, dining in an idol’s temple, will not his conscience, if he is weak, be strengthened to eat things sacrificed to idols?
1Cor. 8:11 For through your knowledge he who is weak is ruined, the brother for whose sake Christ died.
1Cor. 8:12  And so, by sinning against the brethren and wounding their conscience when it is weak, you sin against Christ.
1Cor. 8:13 Therefore, if food causes my brother to stumble, I will never eat meat again, so that I will not cause my brother to stumble.

James 4:17 Therefore, to one who knows the right thing to do and does not do it, to him it is sin.