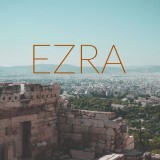 Following the Babylonian captivity, the Lord directed a remnant of Israel to return to the land and rebuild the city of Jerusalem. The nation had neither king nor high priest nor prophet, but the Lord gave them a scribe named Ezra. In Ezra 7:10 we learn that Ezra was a man who "had set his heart to study the law of the LORD and to practice it, and to teach His statutes and ordinances in Israel."

Through Ezra, the Lord restored His people following a period of judgment, and we can learn a lot from Israel's experience as we study this book in depth and verse-by-verse.